With Pisa a distant memory, Christmas over for another year and my London Marathon schedule drawn up, I decided to pencil in a 10K race so I could get an idea of my progress and have a crack at my 34:59 PB. I was curious as to whether my long bout of marathon training had speeded me up at 10K distance. I chose the Eton Dorney race as the route is as flat as a pancake so I’d get an accurate indication of my progress. I wasn't counting on the weather though – and in fact this was my 2nd attempt at the race as it was cancelled a couple of weeks previously because of snow.

The ‘gold’ reference is to the events of last summer as Dorney Lake was home to the Olympic rowing events.  It wasn't the easiest place to get to as we needed to get a taxi from the train station to Dorney Lake. The taxi journey took us through Eton which is somewhere neither of us had been before. We arrived quite early and there was still a ‘duathlon’ taking place when we arrived. It was extremely cold, and standing next to a lake was certainly not the ideal activity for this particular Saturday morning. Finally we were herded to the start line. Having looked at results from previous races here I was confident that I would likely be at the sharp end of the race unless there were any surprise entrants so I made sure I was at the front of the pack.

There were no surprise packages and I ended up leading the race almost from gun to tape, with the exception of the first couple of hundred metres. I set of at a pace of around 5:33 minutes a mile in the hope that I’d finish in around 34:30 but really I should probably have adjusted this pace for the conditions. After a couple of miles it felt like a lot more effort than it should have been. Being out on my own I also found it very difficult to keep up the pace with no one around me to challenge – although at one point I was chased by a wee dog that had strayed onto the course. A couple of miles were significantly slower but I won the race comfortably with almost 3 minutes to spare but frustratingly was a couple of seconds short of a PB. The conditions were a little debilitating though and on a better day it could have been a PB. I could have also paced it’d better though so I can’t just blame the weather. 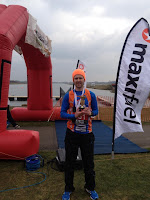 It was nice to win my first 10K although in some ways it felt like a bit of an anti-climax being in the middle of nowhere on such a miserable day and feeling like I hadn't had to compete to win. We weren't able to hang around for the prize-giving due to a commitment in the evening but it was probably just as well as it meant we could escape the relentless cold!