The Start of a Comeback in Maidenhead


The Maidenhead Half Marathon was my first race of any sort since as far back as August 2011. I’d chosen a half marathon as I’d decided to try and qualify for the 2013 London Marathon (confusingly you can read about this in a future post here). I had to pull out the previous 2 years because of my shin splint issues and I've been desperate  to qualify again. There’s only so many times I can stand and watch the marathon go past! However, having already missed the deadline for the Good for Age category which I qualified with previously, the only means left is a  UK Championship place. The qualifying time for a man is sub 1 hour 15 for a half marathon and sub 2 hours 45 for a marathon. My PBs are 1:17:08 and 2:47:51 respectively so it might not sound like I'm far away but it is by no means easy to take a couple of minutes off those PBs, especially as they are from 2 years ago.  Leading up to the race I had done a few weeks of training but I was really using this race as an indicator of where my fitness is and whether qualification for London is a realistic possibility or not.

For the first time I had Sarah join me on a race day. It was great to have the support as I have been used to going to travelling to smaller races like this on my own. It was relatively straight forward to get to Maidenhead from  London  as there is a regular train service and the start of the race was handily very close to the station. The only complication was forgetting my railcard and having to pay for a new ticket! The last thing you want in the build up to a race is a stressful situation like this. At least picking up my race number was a quick process despite the large numbers of runners and supporters who were congregated in the area.

The race was started in Maidenhead town centre by Gold medallist Paralympian Sophie Christiansen which was a great touch so soon after the Paralympics. There was a real buzz around the start with plenty of enthusiastic supporters lining the first straight making for an exciting event. I got myself into a good position the front pen and didn’t have to do much jockeying for position. The gun went and with all the excitement I made a familiar error starting the race far too fast. I was racing like this was a 10K instead of a half marathon. I passed Sarah on the first bend and we flew through the town. I regretted my eager start within a few miles when I really started to struggle to keep up my early pace. My mile splits (below) tell the story. There are a whole 45 seconds between my fastest and my slowest mile, which is not good for a fairly flat half marathon.


The course was flat and therefore fast, meaning there was good potential for a fast time. I must admit I don’t remember too much about the race itself other than the middle of it being a real struggle because of lack of race practice and my early pacing. However I battled through and managed a pretty fast last mile and even a sprint finish. In fact it turned out to be my 2nd fastest half marathon time. My time gave me the confidence that I wasn't too far off where I was a couple of years ago but also reminded me how much work there is left to do. 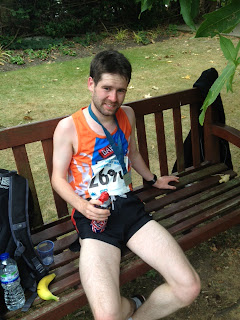 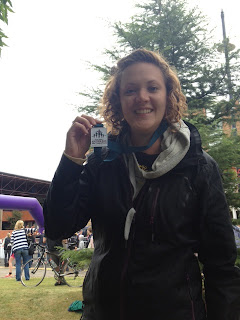 Click here for results.
Posted by Jamie Bannister at 15:47