Having posted a time of 35:25 in the Battersea Park 10K a few weeks previously I knew I had a great chance of achieving my long term goal of going under 35 minutes and I was hungry to do it as soon as possible. My chosen race to give it a crack was set in Old Deer Park in Richmond. Richmond is quite a leafy well-to-do area of South West London and quite close to where I live in less well-to-do Brixton. I knew it would be a flat course giving me every chance of a fast time. I even got to meet my marathon hero Darren Tanner again who had also entered! Unfortunately he’s been nursing an Achilles’ injury so wasn’t in the same shape as he was when he won a 10K in just over 35 mins recently.

Fernando! Darren!
Judging by previous years’ results I even thought I had a chance of a top 3 finish for which there were cash prizes up for grabs. That was until I spotted Fernando, the man who thrashed me in the last race in Battersea Park line up at the start. There were a few serious looking competitors so I was beginning to wonder. Anyway, to  the race….. It was a very quick start and there was no way I was going to follow the pace of the first three. Fernando (the man who won Battersea Park) shot away quickly as I expected and I was happy to settle into the 5th/6th place. This was ok considering there was a field of over 550! 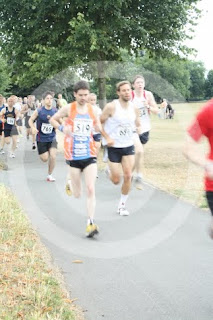 The route started on the grass of the park, then was mainly run on road, until we came to the Thames where we went onto some loose stones which was a bit tougher. I was really giving everything I had to get my elusive sub-35 but I was finding it tough. By the last 2Ks I was really struggling to maintain the 3:30/km pace that was required. My GPS watch also tells me my average pace over the race and it was teetering around 3:29/3:30. Just before the final straight we came to a really tight turn and had to go around a gate which isn’t what you want when every second counts! Then I came to the final straight, which was on grass making it even harder to finish! I hit the booster button though and whizzed towards the line. As I crossed the line my eyes fixated on the clock – 35:00! 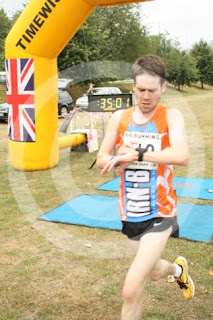 Now I was left wondering whether my official time was sub-35 minute or not. There was a chance that my chip time was just under. Although as you can see from the photo above it does like like there'd be at least 2 seconds between the 35:01 on the clock and when I first hit the finish mat. I didn’t find out until late afternoon, but it was good news -34:59! A sub 35 10K had originally been my target for the end of the year, then the end of the summer, and then the end of July. That second made a big difference! This was the culmination of months and months of training so I was absolutely delighted. Sub-34, you are next!
Position: 6th/ 553
Time: 34:59 (PB!!!!!)
Posted by Jamie Bannister at 12:44 No comments:

I entered the BBC Running Club 10K after seeing it advertised on the Runner's World website. I had no idea what the BBC Running Club was but the race is staged at Regent’s Park, which is a flat course so I thought it’d be a good opportunity to have a crack at the PB. Saying that, it was an evening race and a day at work followed by a rush hour tube journey probably isn’t the best preparation. Having heard some of the results from previous years I went into to race thinking I had a decent chance of a top 3 finish though. 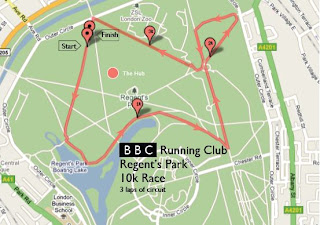 The race route is 3 laps around a section of the park. It was pissing it down before the start which is just the way I like it. The start was on a very narrow path so I got myself a position right on the start line to avoid the congestion. The race was started (for I think the 26th year) and a trio of us got away quickly, all three of us too quickly! I settled into 3rd place as the pace was too fast for me if I was to go the distance. It was the right decision as the guy directly in front of me slowed very quickly and it wasn’t long until I breezed past him into 2nd – talk about peaking too early!

Often in 10Ks I get an idea very early on of what kind of position I’m likely to come in. At this early stage I thought 2nd was a stick on. The leader (Gareth Evans) was already a fair distance in front of me (although I could still see him at least) and I’d just breezed past  the other guy but I was still going comfortably at my normal 10K race pace. This is when racing tactics really come in. If I was just racing for position I could have probably just eased down a bit and taken 2nd place, but I had my PB top beat as well!

Gareth Evans pipping me to the post in last race

I was on my lonesome for most of the rest of the race and couldn’t see anyone behind me. For most of the time I could see my target in front of me, but it seemed like too much of a distance to make up. You just never know though so I battled on. Then as I started the last lap I was getting some cheers from the marshals and race organisers and one shout of “GO ON, YOU CAN CATCH HIM!”. This was an absolutely inspirational shout from the big man and it instantly gave me a boost and some real belief! So I kept battling on in hope more than anything. Incredibly, I began to notice the gap was reducing quickly as we neared the final 2km. I was in hot pursuit of the leader, dramatic stuff! Despite being almost resigned to coming 2nd for most of the race, I genuinely thought that I was going to catch him in the closing stages.

Gareth was hanging on though. We reached some traffic (human) as well as we started lapping the slower runners so a bit of weaving was required. Then the final straight came sooner than I had anticipated. I initiated my sprint finish and made up a massive amount of ground, but it was too little too late in the end. He managed to hang by the skin of his teeth, with only 2 measly seconds separating us. There was almost 2 minutes between me and 3rd place! After the race it transpired that the victor was the same man who pipped me to the post 2 weeks ago in the Richmond race. So not only did I equal my PB but the same person was a position ahead of me again as you can see from results below. I’ll need to find out what races he isn’t doing next time!

After getting changed it was time for the prize-giving. This time I was given a wee glass ornament, which is something different. This made up for the slight disappointment I was feeling for not beating my PB, and for being so close to winning the race. The better man won on the day, although we both paced our races quite poorly. This is definitely an area that I need to improve on. 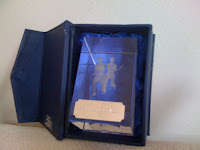 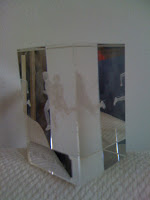 After the prize-giving many of us headed to the pub, which in hindsight might not have been the best recovery. Four pints on an empty stomach after a 10K is not very professional and I won’t be doing that again! But I made some new friends, who you can see in the photo below, and had a great night with Jason and the girls and members of the BBC Running Club. I was even having a pint with a guy whose job it to make up the questions for the Weakest Link! Sometimes London isn’t so bad…….. 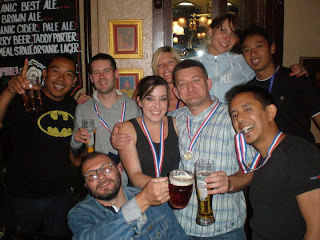